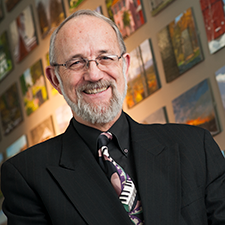 Michael Hood retired in 2018 after 20 years as Dean of Fine Arts at Indiana University of Pennsylvania, and following 22 years at the University of Alaska Anchorage where he taught, acting, movement, stage combat, period style and stage dialects, and where he served as Department Chair of Theatre and Dance and as Associate Dean of the College of Arts and Sciences. He began his work in combat while in graduate school at the University of New Orleans where he was a member of the UNO saber team.  At UNO he wrote his master’s thesis on Combat in Shakespeare’s History Plays, excerpts of which were published in The Fight Master.

In addition to his classes at UAA and IUP, Hood has taught combat workshops at local, state and regional conferences, as well as in St. Petersburg and Yuzhno-Sakhalinsk, Russia, in Nanjing, China, and in Jakarta and Surabaya, Indonesia.  He helped to found the Allegheny Alley Fight SAFD sanctioned regional workshop. A Certified Teacher with the SAFD since 1991, Hood holds the MFA in Acting and Directing from UNO.  He previously served as SAFD Rep for Alaska, and as President of the Northwest Drama Conference.  He is a member and Past-President of the National Theatre Conference and in 2015 was inducted as a member of the College of Fellows of the American Theatre.