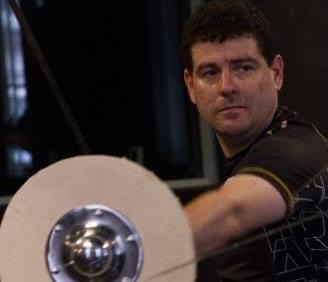 MERON LANGSNER, PhD, has composed violence for over 175 productions, tours, and films at venues that include the American Repertory Theatre, Merrimack Repertory Theatre, New Repertory Theatre, The Lyric Stage Company of Boston, The Boston Center for the Arts, Ensemble Studio Theatre, Gallery Players, DUAF, Incubator Arts, and several academic theaters (Tufts, Brandeis, Boston University, Boston Conservatory, Pace University, College of Staten Island).  In 2007, Meron was one of three playwrights in the country selected for the pilot year of the National New Play Network Emerging Playwright Residencies, fulfilling his residency at New Rep.  His plays have been performed around the country and overseas, and published by Applause Theatre Books, Bloomsbury, Smith & Kraus, and YouthPLAYS.  Publishers of his scholarly work include McFarland, Oxford University Press, Puppetry International, and the Electronic Journals of Martial Arts and Sciences, as well as numerous articles in The Fight Master, American Theatre, The Cutting Edge, HowlRound, and The Theatre Times.  He holds an MFA in Playwriting from Brandeis and an MA in Performance Studies from NYU's Tisch School of the Arts, and a PhD in Drama from Tufts University.  He is also an alum of Stonybrook University’s Audio Podcast Fellows.  He has taught at Emerson College, Boston University, New York Film Academy's Summer Institute at Harvard, The Tom Todoroff Conservatory, and Tufts University, where he was the recipient of an award for Outstanding Contributions to Undergraduate Education.  He was in the first cohort of the Choreographers' Track at Summer Sling, and has since returned to teach a workshop on dramaturgy for fight directors the following years.  Meron has been a proud member of the SAFD since 2001.