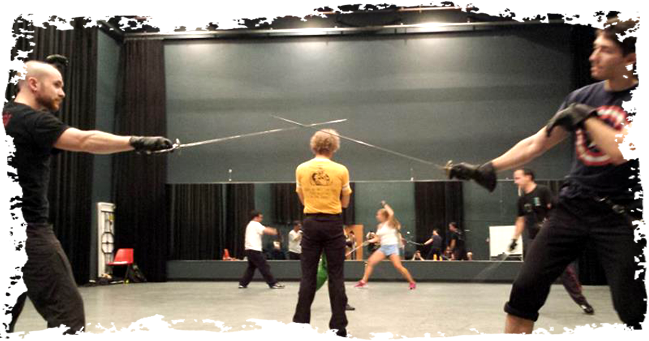 This is an overview of the official Society of American Fight Directors rules and regulations governing the Skills Proficiency Test.

The SPT rules have evolved over a period of twenty years, and involve many issues. For example, who may teach a skills test, number of student contact hours, safety issues, actor training, institutional responsibility, fee schedules and more.

Basically, any SAFD Certified Teacher, Fight Director, or Fight Master may teach a skills class. There is a Minimum of 30 Contact Hours per weapon style to train students to a level to be tested. We currently recognize eight weapons that are available for testing as the most common in theater and film, and they are:

Each fight test must be judged, or adjudicated, by a Fight Master. This individual must be brought in, housed, and paid a fee to judge the students. The fees are on a sliding scale, depending on the number of students taking the test. The rules also state that no one may judge his own students, so even a Fight Master running a class must bring in an outside judge. This insures that the testing will be impartial, and that national standards will be observed.

Students may elect to test in one, or a number of weapon styles.

On the day of a Skills Test, students present scenes within which they perform set choreography created and taught by their teacher. This is the first half of the test, and is open to the public. The idea is that they must be able to perform the choreography safely while in character, and do so in a public situation, much like a performance in a theater. Each weapon style must be performed with a partner within a scene from existing dramatic literature. Students may also elect to change partners for different weapons skills.

There is also a second half of the test, whereby the adjudicator can ask the students to perform additional techniques to satisfy any questions the adjudicator may have as to a student's skill level. This part of the SPT is not open to the public.

Though a student may test in any number of weapons on test day, the SAFD recognizes a number of different levels of proficiency. They are:

Students taking the skills test may receive either a Recommended Pass, a Basic Pass, or a no pass in any or all the weapons on a particular day. Students also test as individuals, and it can happen that one partner does well, and the other does not. If a student passes, he or she is given a signed certificate stating their skill level, the date of the test, and an expiration date. The results of all tests are published in the SAFD journal The Fight Master. The SAFD recognizes that skills left unpolished over time atrophy, therefore all tests have a three-year expiration date. Click here for more information on keeping a certificate current.

The test fee is $50.00 for the first weapon tested and $5.00 for each additional weapon tested per student.  This fee covers all SPTs performed in the same session. This money is to be used to cover adjudication costs.  Other fees and expenses over and above that are born by the institution or individual hosting the test.